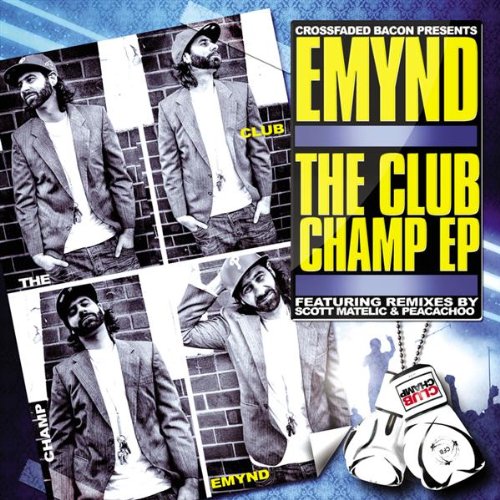 Crossfaded Bacon is proud to announce the release of Emynd’s newest digital release *THE CLUB CHAMP EP* featuring 6 brand new club crunching tracks. You can cop the release today on Amazon, iTunes, or Juno for them DJ quality jammies (320 MP3s/WAVs). (It should be up on Turntablelab soon as well, but their shit is tripping at the moment).

Release Info:
“The Club Champ EP” is Emynd‘s newest digital-only EP of exclusive Club and Dance anthems that showcase his forward thinking approach of uniquely combining his vast influences, infusing songs with elements of Hip-Hop, House, Baltimore Club, and New Orleans Bounce. On the title track “The Club Champ,” Emynd digs deep into his Hip Hop breakbeat background, producing an energetic Bmore influenced banger that thumps with heavy organs and smashing kick drums. While Scott Matelic‘s remix of the track adds various twists and turns that recontextualize the vibe effortlessly, premier New Orleans producer Peacachoo‘s Bounce remix completely deconstructs the song, transforming it into an entirely new Bounce anthem that’ll rattle the bassbins from the Bayou to Bass Music parties everywhere. Rounding out the release are the tumbling “Triggerman” bells on “Hot Down Here,” the NY House influenced “Okay! What’s Up!” and “Hold It Down 2009” — a track originally featured exclusively on the Do It To It Volume 2 Vinyl release alongside work from heavyweights Nadastrom, Bird Peterson, and Tittsworth. (“Hold it Down 2009” is Emynd’s updated re-working of the classic 2 Bad Mice song “Hold It Down”) Already supported by some of the biggest DJs in the world from Diplo to Sinden to Dave Nada, it’s another sure fire, champion sound release!

Today I’ve upped 320 MP3s for the internets to download of Scott Matelic‘s great remix of the title track, and my “Hold It Down 2009.” Comments and feedback appreciated as always and thanks for the support!